Join us as we sit down with David and Robert Childers to learn about their love of music, art and family.

It All Started At The Van Gogh Museum

David Childers, a singer/songwriter residing in Mt. Holly, is the proverbial study in contradictions. He’s a former high-school football player with the aw-shucks demeanor of a good ol’ Southern boy. But he’s also a well-read poet and painter who cites Chaucer and Kerouac as influences, fell in love with folk as a teen, listens to jazz and opera, and fed his family by practicing law before turning in his license to concentrate on his creative passions. Bob Crawford of The Avett Brothers calls David “a great friend, a great thinker, and a great man ... a true North Carolina treasure.”

Robert Childers has also had long-standing interests in artistic endeavors. Robert is well known in the Charlotte music community as a musician, sound man, and promoter. Art is another facet of his creative personality. The best description of Robert’s artwork comes from the words of his father, David- “His work often startles and disturbs me, like many of my own favorites: Goya, Breughal, Picasso, and Dali. He has an envious precision and control over the figures he paints, and the wit of a satirist in arrangement of those figures, and often in his own narratives or commentaries written on the pieces.”

About 13 years ago, David and Robert were touring through Holland as part of a musical tour. They arranged for a visit to the Van Gogh Museum and were both subsequently inspired to begin creating art. You can purchase and view more of David and Robert’s art at megamegamega.net. 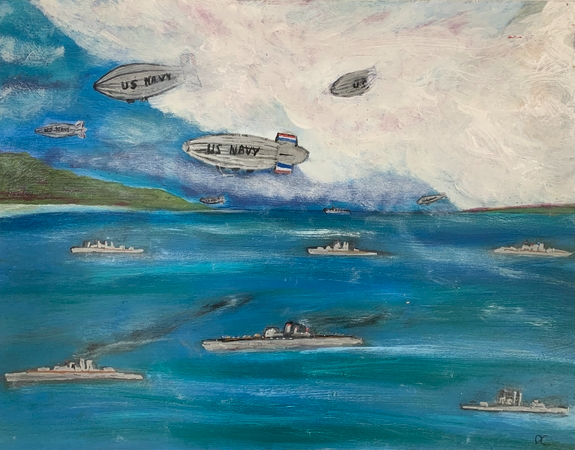 Hog of the Foresaken

End of the Ride 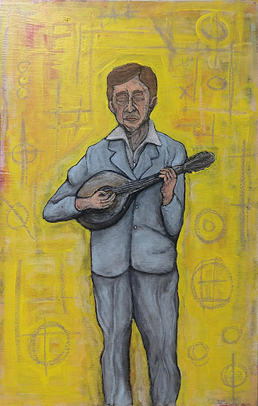 Acrylic on canvas and metal

It All Started At The Van Gogh Museum will be on display in-person in the Depot Gallery from February 16th- June 12th, 2021.